The History of Kensal Green Cemetery and West London Crematorium

Kensal Green Cemetery opened in 1833 and was the first commercial cemetery in London. The need for large cemeteries in London was stimulated by the increase in population and the inadequate space provided by existing cemeteries and churchyards.

Campaigners for burial reform and public opinion considered the best solution would be “detached cemeteries for the metropolis”, and in 1832 Parliament passed a bill that incorporated the General Cemetery Company “for the Interment of the Dead”. (Source: The Penny Magazine, August 1834).

The General Cemetery Company had purchased land for the cemetery in 1831 and promoted a competition for the design of a new Cemetery at Kensal Green. The brief included two chapels with catacombs, entrance gateway with lodges and a landscaped layout for monuments. There were 48 entrants, and the winner was Henry Edward Kendall (1776- 1875) for his designs for buildings in the Gothic style which can be seen in his perspective drawing in the RIBA Architectural Library.

However, the Chairman of the General Cemetery Company preferred a neo-classical design of building and persuaded the Surveyor to the Company, John Griffith, to draw up new designs in the Greek Revival Style. It was Griffith’s designs which were eventually built.

The Cemetery was divided into the consecrated Anglican section and an unconsecrated one for Dissenters. The chapels in the neo-classical style used the Doric order for the Anglicans and Ionic for the nonconformists.

The Established Church was allotted 39 acres and the remaining 15, clearly separated, were given over to Dissenters, a distinction deemed crucial at the time. Thomas Liddell presented a plan for the new cemetery. He was a pupil of John Nash, who had recently designed Regent’s Park. The final scheme however was prepared by John Griffith of Finsbury, the protégé of the Chairman of the Board, Sir John Dean Paul. The final landscape designs were by Richard Forrest, who had been Head Gardener at Syon Park. 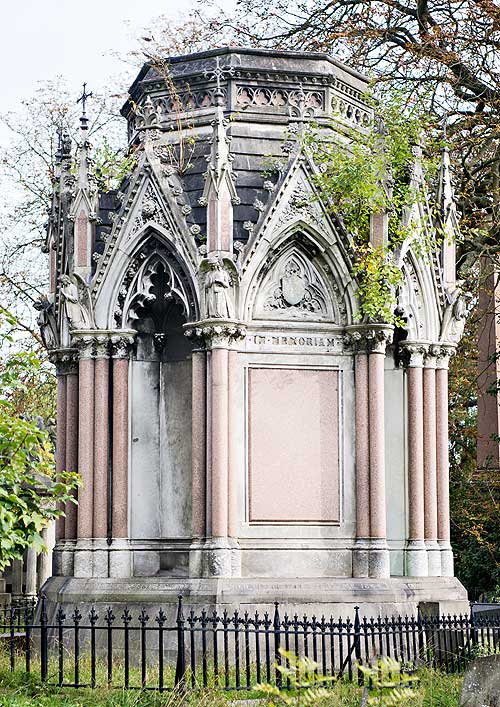 The grounds were excavated and planted by Hugh Ronalds in a modified landscape style with informal elements and central axis which was popular in the early I 9th century Planting was carried out using formal avenues and informal specimen planting supplied by Kennedy of Hammersmith. This style was probably influenced by Père-Lachaise Cemetery in Paris (1804) and the writings of J C Loudon (1783- 1843) in his Encyclopaedia of Gardening and Gardeners Magazine (1822). The layout is described in a contemporary magazine:

“The ground is laid out in gravelled roads of sufficient width for carriages, and planted with forest trees, evergreens, and other shrubs and flowers. The visitor has before him a long vista of slightly-ascending ground, termination of which is concealed by trees and shrubs”
(The Penny Magazine, August 1834)

The combination neo- Classical buildings with richly planted grounds creates a very special Arcadian landscape. The buildings are positioned in dominant settings within the cemetery. The same magazine describes the temple and the colonnade in consecrated section as:

“The most conspicuous objects in this part of the cemetery are the chapel and the colonnade. The chapel stands nearly in the centre of the ground, and is intended for the performance of the burial service according to the rites of the Church of England. It is a very appropriate little building though not so large or so handsome as that in the unconsecrated ground; but we are informed this is only a temporary structure, a site having been reserved for the erection of another on a more extended scale. Along part of the northern boundary-wall a series of catacombs extends, which are at present calculated to contain about 2000 coffins. The line of these vaults is indicated, above ground, by a colonnade of Greek architecture, designed for the preservation of tablets and other monuments in memory of the persons whose bodies are deposited underneath.”

This landscaping transformed the Cemetery into a form of memorial garden, and an attractive location for the tombs of the rich and famous, the burial of HRH Prince Augustus Frederick, Duke of Sussex, (1773-1843) and his sister HRH The Princess Sophia (1777- 848) establishing Kensal Green as a society burial ground.

Initially the area of the Cemetery was 55 acres, and a further 22 acres were developed on existing land to the west of the Cemetery. The West London Crematorium and Gardens of Remembrance were also developed in the east of this area in 1939 which are also run and maintained by the General Cemetery Company.

A Friends organisation, known as The Friends of Kensal Green Cemetery was established on 13 June 1989 which has helped to stimulate concern and interest for the long-term conservation of the Cemetery. They have provided practical help in the clearance of ivy minor maintenance and light reconstruction work of broken and dislodged graves. Much work has been done by the Friends to raise the profile of the Cemetery as a place to visit and to organise regular guided tours.

The Friends took the lead in restoring the Dissenters’ Chapel completed in May 1997. The Historic Chapels Trust leased the Chapel from the General Cemetery Company and assisted by grants from the Council (through North Kensington City Challenge), English Heritage and the Heritage Lottery Fund, refurbished the chapel and built new visitor facilities. Subsequently the Chapel has become the home of the Friends of Kensal Green Cemetery.

The best site for finding out about famous people buried in the Cemetery is the Friends of Kensal Green Website.

The Friends have produced a book entitled ‘Paths of Glory’ which details the most famous residents of Kensal Green Cemetery.